West Elevation arches were set out & hand cut at Bulmer's workshops. The project won 4 titles and high praise from Judges at the 2006 Brick Awards. The Renaissance Hotel was completed in 2010 in similar style and quality. 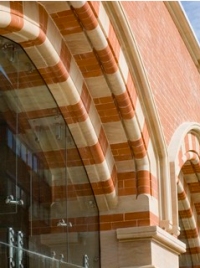